Super Ammo Kratom is not to be confused with low-quality Kratom; Super Ammo is among the highest quality kratom products around. It can give you more energy, focus, and clarity than the ‘pimp grades.’ Dozens of Kratom strains are available, but this one will keep your mind sharp and your energy level up. If that is what you need, Super Ammo Kratom is for you.

What is Kratom, Anyway?

What is this plant, and why is it so powerful? Kratom (Mitragyna speciosa) has been used in Thailand and surrounding areas for hundreds of years. Previously known as “Kakuam” or “Biak-Biak,” the name “kratom” is thought to have been derived from “ketum,” a word used in some South Asian languages.

The various strains are grown for specific qualities, which is why different strains produce different effects. Super ammo has evolved to produce the most focused and energy rather than pain relief. Red vein strains generally produce a better pain management effect.

The bottom line is Folks have used this botanical successfully in many parts of the world for hundreds if not thousands of years. That said, Kratom should be used with the same caution as any prescription or over-the-counter medication. It has side effects like prescription medication, but the side effects are fewer and do not persist.

Is Kratom A Medicine?

The short answer is no. There is also no hard scientific evidence showing that Kratom use is effective. However, people have used this plant successfully for many years and continue to use it successfully today. In modern times many people have kicked their opioid habit using this remarkable plant from mother nature.

According to Darshan Singh Mahinder, a professor at the Centre for Drug Research at the University of Science Malaysia, throughout Malaysia, the leaves of the kratom plant are traditionally crushed and made into a tea. It’s used to “self-treat heroin/morphine dependence, or to reduce opiate withdrawal among illicit drug users,” he said. It can also be used for pain relief.

How Popular Is Kratom?

The American Kratom Association (AKA) estimates that 10-16 million people in the U.S. regularly use kratom by either eating its ground leaves in food or brewing them in tea. The AKA is a consumer advocacy group that has been around since 2014 and is a wealth of information about the herb and its use in the United States.

Super Ammo Kratom was specifically formulated to be used as a recreational and opiate alternative. Aside from the mitragynine in its extract, this version of Super Ammo Kratom is powdered with additional natural herbal ingredients that help stimulate and relax.

-It is excellent for chronic pains and injuries because it acts as a painkiller and analgesic.

– Reduces inflammation due to its anti-inflammatory properties.

– Helps some folks with opiate withdrawals as it is a natural opioid agonist.

– Acts as a mild antidepressant.

– Induces creates a sense of well-being.

– Super Ammo Kratom is safe to use within the proper limits.

Suppose you are active daily and have to deal with muscle and joint pains from time to time. In that case, Super Ammo can help you with some pain relief and also help with your energy level at the same time. Many folks call it their go-to kratom strain because it is the strongest out of all the others.

The energy boost is like no other, and it will leave you feeling calm and stress-free. The pain relief effects are fantastic, too. It’s full of energy-enhancing alkaloids that will make everything feel more effortless, from doing household chores to making working easier. 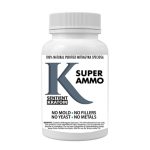 FDA NOTICE: Statements on this website have not been evaluated by the Food and Drug Administration. This product is not intended to diagnose, treat, cure or prevent any disease.

This product is for sale only to those 21 years or older. Age verification with a photo ID is needed at checkout.

NOTE: We do not ship Kratom to states where it is not permitted.  Sweet Southern Trading retains the right not to ship Red Maeng Da Kratom to any states or territories where local laws conflict with its use.

Unlock The Power Of White Vein Kratom: All You Need To Know About this Powerful Strain

The Data Behind Kratom’s Mitragynine and 7-Hydroxymitragynine

On all retail orders above $50